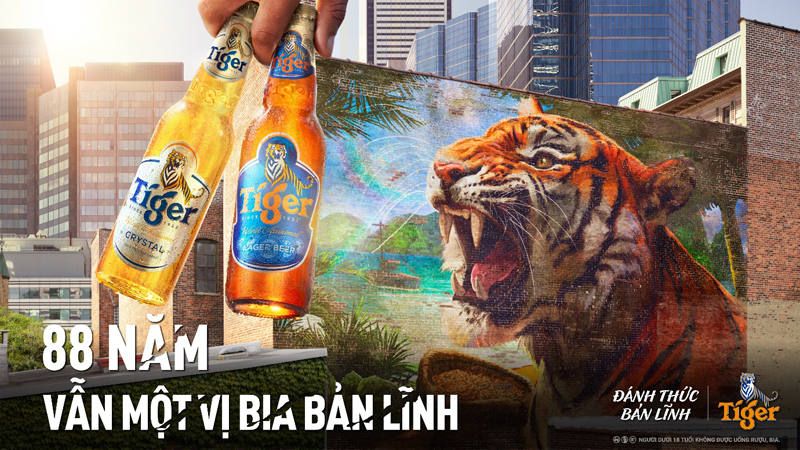 Commenting on this remarkable milestone, Ms. Anna Bizon, Marketing Director on behalf of Tiger® Beer, said “Born on the streets of Asia in 1932, Tiger® Beer celebrates this great milestone as number 88 is believed to represent prosperity and success. Our Tiger will keep roaring into the future with the same bold taste and its ‘Uncage’ spirit that have won over the heart and soul of Vietnamese consumers. We want to thank our consumers for their long-standing support by refreshing the look of Tiger® Beer, rolling out promotions and other exciting activities on the way.”

This festive season, Tiger® Beer comes with a new look while keeping the same bold taste that has won worldwide acclaim throughout its history. “We believe that Tiger® fans will find this new look refreshing yet familiar as it accentuates while preserving Tiger® Beer’s signature branding elements. Our Tiger® and Tiger® Crystal will come in specially designed cartons for this festive season, making them the perfect choice for both gifting & celebration” added Ms. Bizon.

Supporting the launch of this campaign is a TV commercial, showing how Tiger® Beer has been brewed against all odds and challenges throughout its history. Across Vietnam, Tiger® Beer will reward its loyal consumers with surprise 88-year celebrations at over 4,000 outlets in 16 cities and provinces.

In line with the brand’s commitment to supporting raw creative talents, Tiger® Beer will organize a mural art contest, encouraging Vietnamese talents to express the Tiger – the Bold Gene inside them. Tiger® Beer will join these artists in bringing their mural artworks to life at signature Tiger outlets.

The 88th anniversary campaign is only open for consumers from 18 years old and above. For more information, please visit the official Facebook Fanpage of Tiger® Beer at www.facebook.com/TigerBeerVN

In 2017, 2018 and 2019, HEINEKEN Vietnam was recognized among the top most sustainable companies in Vietnam by the Vietnam Chamber of Commerce and Industry (VCCI) and as a best place to work in Asia (in 2018, 2019 and 2020) by HR Asia Magazine, one of Asia’s leading publications for HR professionals.