Da Nang, 26 December 2022 – Larue officially introduces the impressive Installation Art Display named "Breaking Dawn", which is made from nearly 40,000 used beer cans. These cans are all contributed by the locals in Da Nang and Quang Nam. The Installation Art Display also won the 1st Asia Record of Recycled Art and will be featured at the "New Year 2023 Mega-Party” hosted by Larue beer on New Year's Eve in Danang.

For more than a century, Larue beer has been associated as a "cheerful beer brand" by the people of Da Nang and Quang Nam. Together with HEINEKEN Vietnam, Larue beer constantly contributed to local development and social activities.

With the world’s best coastal line and unique tourist attractions, Da Nang and Quang Nam are proud to own the dynamic tourism landscape. However, these two cities’ economies and tourism were hit hard during the pandemic. Larue beer, inspired by the love and pride of the local community, will continue to contribute to tourism recovery and the economic growth of the beloved cities.

Larue beer, in cooperation with Da Nang Department of Tourism and the Department of Information and Communications, has encouraged local consumers to donate nearly 40.000 used cans to create the biggest Recycled Art in Asia named "Breaking Dawn". In particular, all of the used cans are 100% recyclable, meeting Larue and HEINEKEN Vietnam's criteria for circular economy and zero waste to landfill.

Ms. Anna Bizon, Marketing Director, HEINEKEN Vietnam, on behalf of Larue beer shared more about this activity: “The past 2 years were truly a challenge to the tourism industry, which has a significant contribution to the economy of Da Nang & Quang Nam. To support stimulating tourism, which consequently enhances the economic recovery, Larue beer has brought about this 1st ever Asia Record of Recycled Art to Da Nang & Quang Nam. The impressive Art Display is promised to be a new attraction spot in this Festive season, and also to ignite the pride & optimism of local people for a better new year.”

Carrying the expectation to be the city’s spotlight, this Recycled Art made from beer cans is an example of Larue beer's efforts to promote green and sustainable tourism development, which is in line with the Danang government's direction.

Elaborating on the story of “Breaking Dawn”, Ms. Cao Vu Hong Nhung, Marketing Manager of Larue said: “Symbolizing the sun & the smooth wave, the Recycled Art sculpture represents the belief for a brighter new year of 2023, a new year full of optimism. The Recycled Art is also made from nearly 40,000 recycled aluminum cans, which were contributed by Da Nang & Quang Nam people. This installation Art Display represents Larue brand and  HEINEKEN Vietnam's commitment to sustainability. We also hope that this project will raise awareness about the need for sustainable development, especially the green tourism focus of the region”.

THE RETURN OF NEW YEAR 2023 MEGA-PARTY, BE READY FOR THE ASIAN RECORD 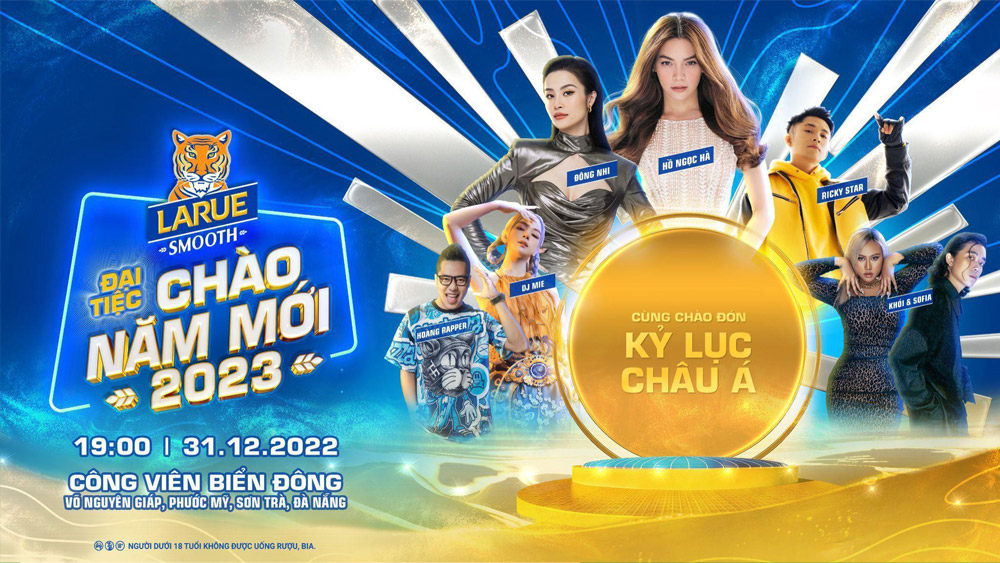 As the key highlight of Larue’s campaigns in this year's Festive season, "New Year 2023 Mega-party" will take place in Da Nang (31/12) and Quang Nam (14/01) featuring the top celebrities lineup such as Ho Ngoc Ha, Dong Nhi, Toc Tien, Lou Hoang, Ha Nhi, Ricky Star, Khoi & Sofia, The Queen Band, DJ Mie, MC Ken, MC Devil, and MC Hoang Rapper. For the first time ever, the "New Year 2023 Mega-Party" will also bring about a series of extraordinary activities, from light performances to augmented reality (AR) and outstanding fireworks, not only for on-site audiences but viewers on VTV8 live broadcasting as well.

Especially, in the event at Da Nang on December 31, Larue beer and the local people will officially receive the 1st  Asian Record for the biggest Recycled Art.